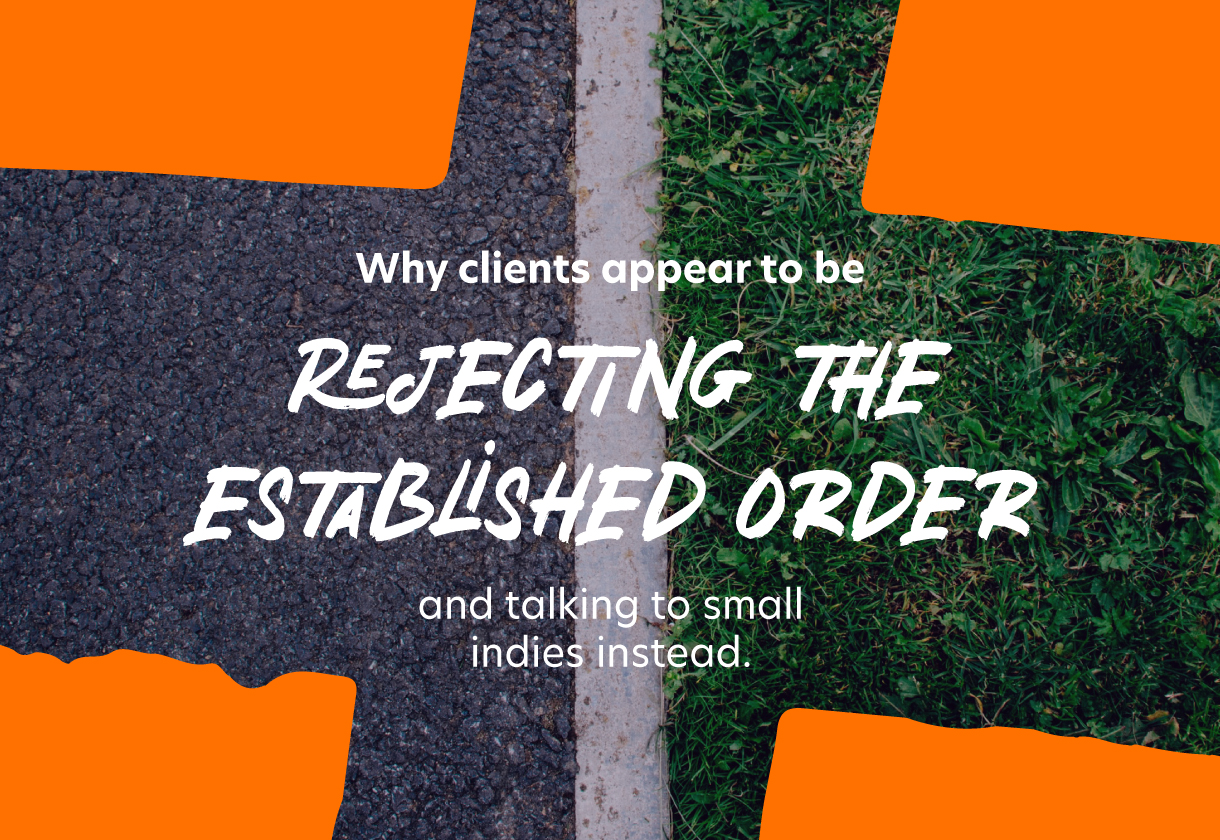 Why clients are rejecting the established order, and talking to small indies instead.

Looking back over my still (relatively) short career, there’s an interesting correlation appearing. As I’ve gained experience, my workplaces have become smaller. It seems to have happened naturally with little conscious input, but the trend is there.

Like any strategist worth their salt I see a correlation, and ask ‘why’s that?’.

Perhaps it’s an unconscious pull towards smaller teams, a push from my lack of love for the corporate environment, or the allure of gatherings of smart people getting stuck into building the new and throwing out the old. Change as the only constant has always been an exciting idea for heretics. Myself included.

In the last few months I’ve had many a conversation with clients who’ve expressed the same thought. They’ve come to us to talk about a move from established - to subsequent.

Larger agencies come with stacks of benefits. They have the scale to handle big accounts, they make clients feel safe with many layers of storied, highly competent people, they have capabilities that smaller shops couldn’t dream of, and of course they have the pedigree that comes with names like Ogilvy, Saatchi, and Hegarty.

‘No one ever got fired for hiring IBM’. But look around right now, there’s change afoot.

On a grand scale the world is coming to the inevitable conclusion that ‘the way we’ve always done it’ isn’t working any more. Crisis point with the climate, a shocking economic downturn, rampant capitalism and consumerism, the general rethinking of what it means to be a 21st century human being in the Western world. This is happening on a macro scale, but also in the smaller decisions we all make day to day in our little lives that make up society.

So why would a client come to a smaller, independent agency - instead of a larger established one? What do they get here, but not elsewhere? Five diagnoses below:

Anyone with even a little experience in the big, formal corporate world will recognise that businesses have a tendency to forget (or deny) that people are humans. We use terms like ‘targets’ and ‘prospects’ which in a business environment breeds distance, removes compassion, and puts walls up.

In a smaller agency relationship there isn’t space for that distance to exist. By removing formality it becomes possible to have open, honest conversations with clients about their issues and opportunities. Open communication is the basis of a good agency relationship - and will get you further than all of the fancy job titles in Soho.

Why these relationships are more open in smaller agencies is still something of a mystery. Perhaps people are closer to the heart of the business, perhaps it’s the rejection of the corporate that brought them here, perhaps it’s the personality of people who take leaps.

Tradition, process, ways of working, and ‘best practices’ are some of the things that create inefficiency in larger agencies. The model, PowerPoint, or meeting is not the work - the work is the work.

Smaller agencies have the freedom to drop the non-essential, and focus on the problem to solve without distraction. They can also be completely agnostic about the solution.

For example, writing a brief without a template makes many in larger organisations very nervous - but try it. You’ll get closer to the truth - as well as a little free therapy.

There’s a huge benefit in focusing on actually ‘helping’ the client business, rather than achieving client development targets, selling in ‘breakthrough’ tech, or *heaven forbid* obsessing over award entries.

By involving clients in the creative process, giving a ‘look in the kitchen’ as the Dutch say, and talking them through thinking early pays dividends. Not only for the improvement of the working relationship, but by sticking closer together and communicating clearly - getting closer to work that works for the client.

This takes out the ‘guesswork’ around what a client wants. As well as being a nicer way to work.

Big agency world has been (and still is) having a talent exodus. Long hours, poor pay, toxic environments, morally dubious work were tolerated. But no longer.

This shift has meant that a lot of talented people have landed in alternative places, one of which being smaller agency world. They’re either founders, partners, or line cooks in the creative kitchen - and they want to do their job well, producing great ideas that work for people, public and peers - not just make more money for holding company shareholders.

The secret is that these are the people the clients wanted to hire anyway. They didn’t want to pay for departments, shiny central London offices, board-level away days. They wanted those three or four people sitting around that desk - actually doing the work. Ideally, the ones they actually met in the pitch.

This works when economic conditions are relatively stable, growth is consistent, the S&P500 is tracking nicely, and Australia isn’t on fire. That’s not our current reality.

The world, and the creative industries as a part of it need pretty radical new answers to hefty, uncomfortable questions. We need to help our clients continue to make money without continuing the damage many of them have been doing environmentally, societally, or sociologically. This is no mean feat - and it’s going to take some radically alternative thinking.

Smaller agencies are usually staffed with heretics. Those who have rejected norms to be there, have questioned the status quo, and have tried something different because ‘normal’ wasn’t working for them.

In short, exactly the people you need to question the established order, and think of a new way. It’s probably not obvious, but it’s necessary.

In short, bigger agencies are good for many things, smaller indies for others.

Client needs, horses for courses, and the required problems to solve within business will dictate what kind of agency partner is most effective to work with, but it’s undeniable that we’re going to need to develop new ways of doing what we’ve always done. For the reasons above, a smaller partner might just give you the spark you need.

If this resonated with you, if you feel seen, or if you’d just like to vent - talk to us.

We’re nice people, we understand the commercial value of good ideas, and we’re probably cheaper than your therapist.

Drop us an email, or give us a call.