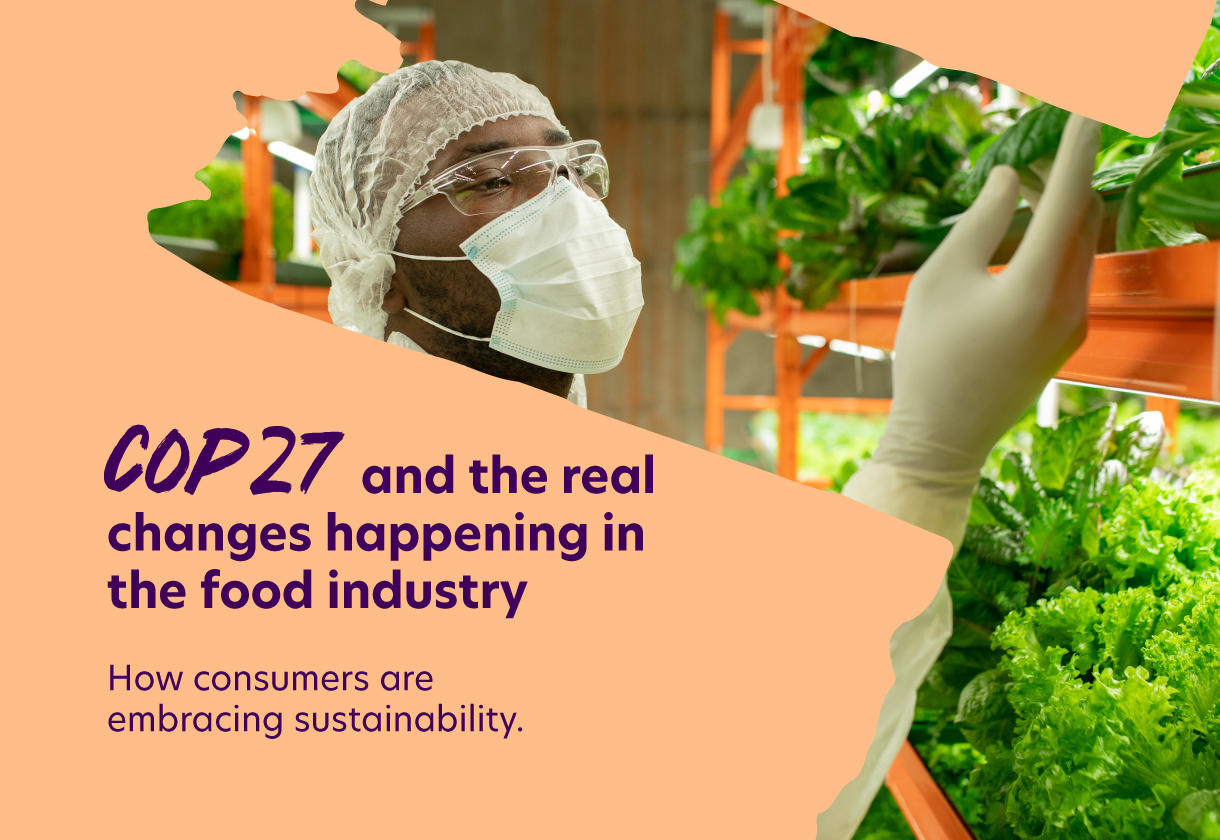 COP27 and the real changes happening in the food industry

How consumers are embracing sustainability.

COP27 is over and you would think the net would be freshly plump with new information on what transpired. Alas, what articles do exist are from publications that are price gated and those that aren’t barely scratch the surface of the event. So how do you find out what happened?

That’s why we are here.

The biggest question dominating this year's summit was whether rich countries should pay climate damage tax to poorer ones while ‘phasing down’ the use of fossil fuels. Which begs the question: is there another way to help poor countries fight climate change?

In short, yes. I believe there is.

But our leader’s response was to make pledges, announcements, launches, and transition frameworks. And the main outcome? After arduous conversations and into the night debating our it was decided democracy really matters for the future of climate change. No sh*t Sherlock.

I could recap what those pledges were but I’m not interested in people talking about action, I’m interested in the changes that are happening now - how we can get behind them, and make them global.

Global industries are going through rapid change but FMCG has some of the most innovative breakthroughs yet.

Hydroponic container farming is booming with the leading supplier Freight Farms raising $17.5M this year across 39 different countries. The containers were sent to struggling communities across the globe in order to provide them with resilient and reliable sources of fresh food all year round.

New companies are popping up rapidly and further innovations to the technology are afoot in order to provide vegetable cultivation that is not currently available, such as wheat.

Vertical farming isn’t only localised in containers, a vertical farm can fit the equivalent of 280 hectares (700 acres) of farmland in a building the size of a large supermarket, and by manipulating the artificial day length and season.

Earlier this year, Walmart announced an investment in the company Plenty as part of its $400m Series E funding round. The retail giant will source leafy greens for all of its California stores from Plenty’s new 95,000 sq ft flagship farm in Compton, California, which will open early next year.

To encourage consumer consumption, Taiwan has converted vacant metro stations into vertical farms alongside smaller pop ups in active ones.

The mycelial industry is booming, with innovations from fashion textiles and leather alternatives to meat, building materials, packaging and biofertilizers. It has been instrumental in creating ways forward for circular economies, transitioning from an oil-based to one based on bio-resources.

Now that fungi is hitting factory scale the cost is becoming competitively cheaper and the environmentally friendly alternatives are sure to grow in use.

Soya farms to feed livestock are one of the main causes of deforestation, this year we’ve seen leaps in circular alternatives for livestock feed. Every year 2.67 million tonnes of coffee are consumed in the EU, which creates large quantities of waste. Companies are now creating mulch for livestock using these coffee grounds instead of importing soya and cereal.

Alongside this the insect farming industry is emerging rapidly, producers are growing insects for animal feed because of their nutritional profile and ability to grow quickly. Data also suggests that feeding insects to livestock has a smaller environmental footprint than conventional feed crops such as soybean meal. This year saw the American Association of Feed Controls approve the use of insect feed for poultry, fish and pigs.

This year the FDA took its first step towards allowing the sale of ‘no kill’ meat. A new concept called ‘cultivated meat’, grown from animal cells without the need to kill any animals. More than eighty companies are exploring this new technology. To promote adoption, Good Meat, part of Just Eat, served its cultivated chicken to guests at COP-27.

Micro protein
COP27 saw a renewed push for the rewilding of livestock farms, by creating an alternative source of meat protein which can be grown in tanks. The proteins are genetically engineered microorganisms that are created using a process called precision fermentation. This technology already exists and is used to produce 99% of the world's insulin and 80% of rennet worldwide. These tanks would also be powered by solar, wind and nuclear. This is part of a wider campaign that includes ten policies that campaigners want governments to adopt in the next 10 years.

Globally, 2,500 different species are caught or cultivated every year for human consumption, including shellfish, plants, and algae. These species support the livelihoods of over 800 million people and supply protein to over 3.2 billion people worldwide.

Although aquaculture is the fastest growing sector within the food industry, it is also the one most in need of technological innovation, particularly if the industry is to meet the growing global demand for seafood with increasing climate change and population growth.

As you can see industry change is being driven from within, not by governments. COP27 put on a big show but the real work is happening on the ground. We know that consumers want to see change, and now. As a creative agency we help brands communicate these changes in order promote their positive impact to consumers and drive further adoption. Get in touch if you think we can help.

Positive Impact trendwatch: 5 Predictions for 2023
COP27, responsibility, and an (actual) turning point
Think on your sins
The rise of ‘Advalism’
Friends, heretics + lunatics