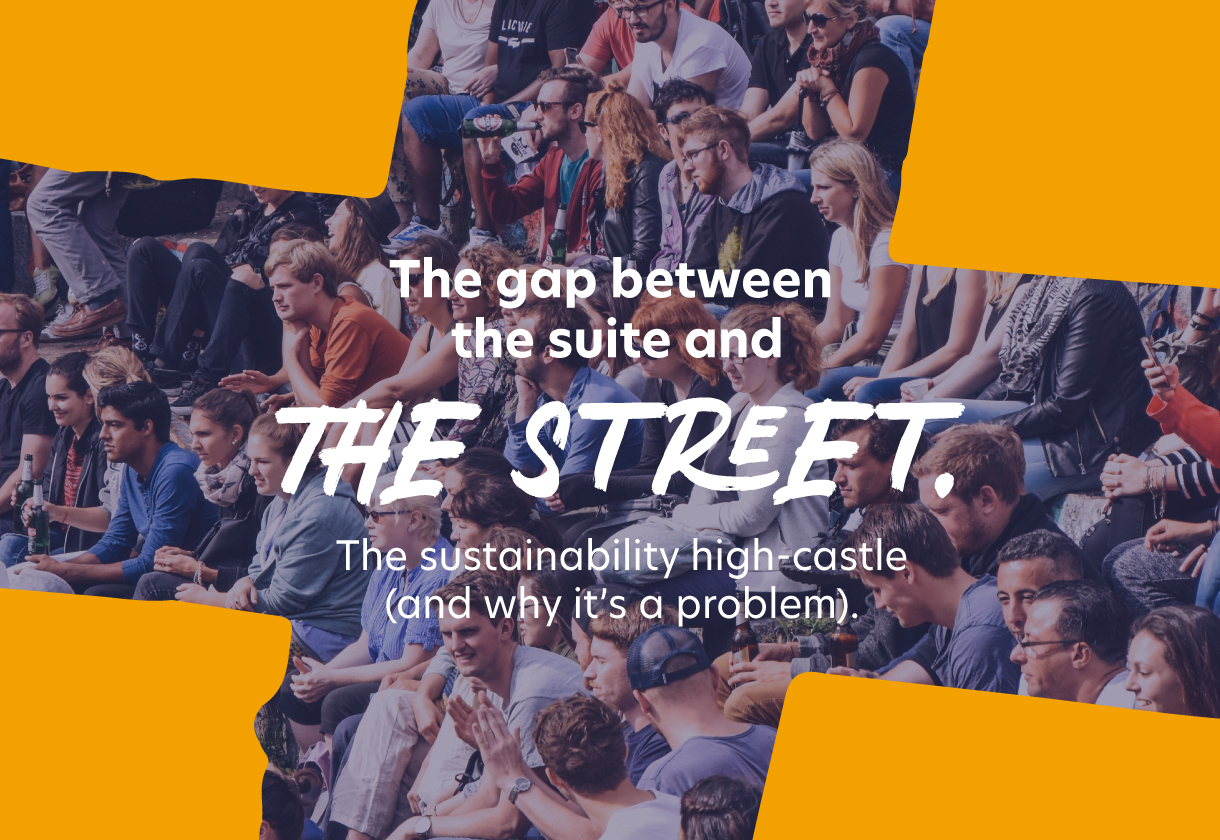 The gap between the suite and the street

The sustainability high-castle (and why it’s a problem).

Last week, I heard an anecdote from a client about a worker in a cardboard box factory who had attended a talk from the CEO about the organisation's sustainability strategy and ambitions.

After the yawns had subsided and the workers had trotted off back to their stations, our chap came up to the CEO to ask him pointedly about what the business was doing considering the plight of the orangutans of Borneo.

Taken a little aback, the CEO rightly explained that the wood they were sourcing for the cardboard was FSC certified, therefore ensuring protection of the orangutans natural habitat, as it was only taken from renewable, well managed forests.

It was a great question that the CEO thought he’d answered. He hadn’t.

It’s also a perfect example of one of the biggest problems in sustainability right now.

I’ve heard this problem elegantly described as ‘the gap between the suite and the street'. And it’s insidiously present in an industry that we need to be hitting hard and taking names.

You’ll see people with an abundance of choices, and no dirt under their fingernails. You’ll see certain circles. You won’t (and this is important) see much of the real world.

I reckon that’s the disconnect. The gap.

Call me a romantic student of history, but change never came from theoretical strategies full of diagrams, commitments, and models. Not from the higher ups. Not from intellectual superiority. Not from slapping the wrists of people just trying to get by.

It came from the hearts, minds, and actions of the majority.

As sustainability people - winning hearts, minds, and facilitating action are our most important jobs. I think we’re failing at them.

Anyone who’s worked in the creative industries knows that coming up with the idea is half the battle, selling it is the other half. It doesn’t matter how clever you are if no one cares.

London has the sixth highest concentration of sustainability professionals in the world. 1.2 million people in the UK work in sustainability focused jobs. That’s great - and growing, but at present it’s an enclosed echo chamber. 98.3% of the population aren’t in that world. We need to convince them. We need to make it matter to them.

Not an awards jury. Or a panel. Or Greta. Or Solitaire. Everyone else.

So where do we start? Great question.

If you’re working in (or adjacent to) sustainability at the moment - here are five things you can do:

The ‘problem to solve’ here is connecting the sustainability decisions that businesses are making - to the real world, and real people's lives. From theory, to effect. From plan, to action. From PowerPoint, to reality.

You’re unlikely to be able to measure the effect of those sustainability decisions. So we’d recommend starting with three human business metrics: Understanding (is it clear?), traction (do you care?), and momentum (can you feel it working?). You can gather this data by asking people how they feel. Like a human being. Maybe buy them a coffee too.

At Fox + Hare, we see sustainability as universal and pragmatic. Everyone should understand it, be able to apply it, and to feel it working in their organisation. It shouldn’t be rocket science.

We act as the bridge between ‘the suite and the street’ for our clients. So if you need help, or any of this sounds familiar - talk to us.

Virtue signal or get out
Elusive Dream Team
Flipping the script on sustainability narratives
Becoming a B Corp will Boost our Impact
What has COP26 taught us about collaboration?