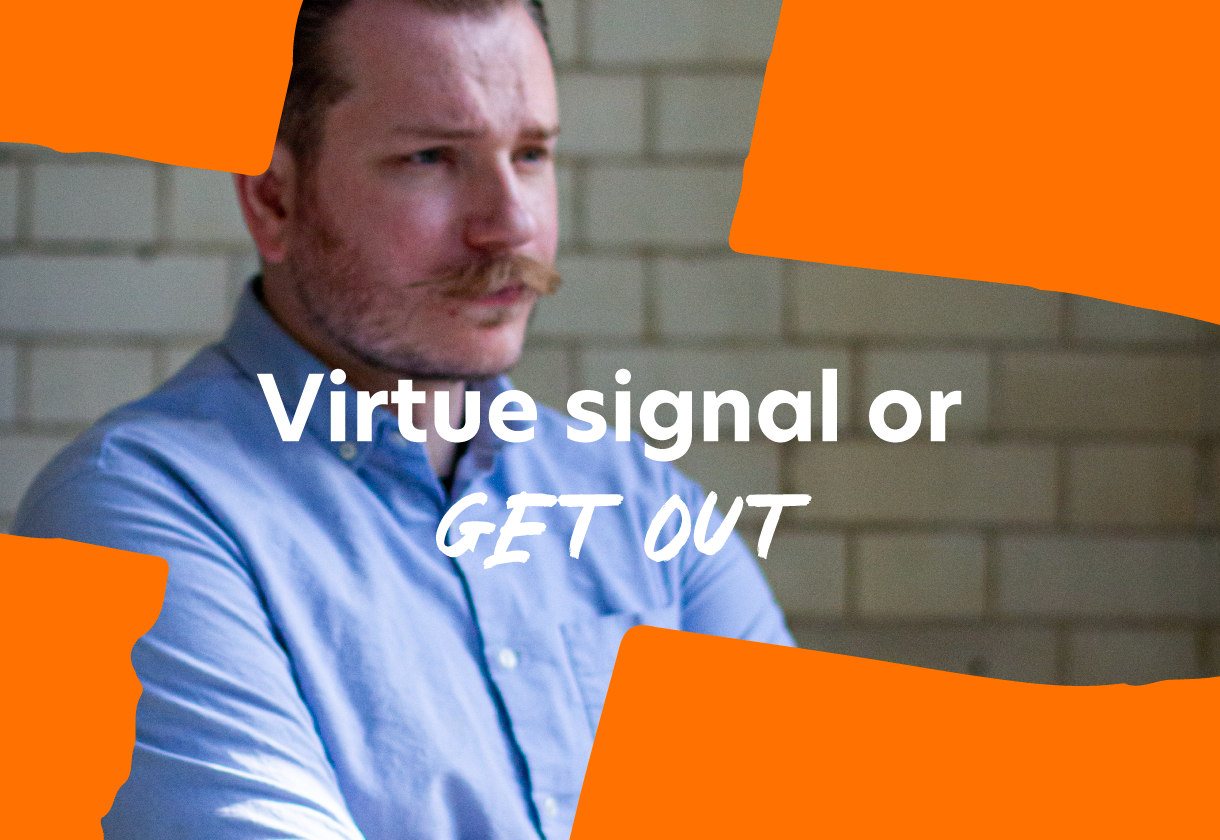 Virtue signal or get out

It’s time to bring the bigger picture into your comms.

When was the last time you watched Eastenders?
No, really, when was the last time?
And after the credits did you see the little logo ‘An albert certified production.’
That means it’s accredited.
It’s got a stamp to prove it was produced sustainably.
I’m not just talking about bringing your favourite flat woke receptacle to set, or making the set runners catch a bus rather than a taxi.
It means everyone eats vegan. The edit suite runs on renewable energy. The costume is rented and the actors get to set via electric vehicle.
Someone's done the hard sums to make it easy for us to say ‘yep, thumbs up, more of that is o-kay’, even if the program was David Dickinson slinging rubbish to senile members of the public.

Over the past few years, that stamp has been appearing on more and more programs as the general public has made their voice heard. We have made it known that sustainable entertainment should be the norm, not the exception.

Yet here we are, big old adverts slipping between the programs, unaccounted for and often a lot more wasteful than your standard half-hour of celeb-based quiz show distraction.

In a world where Adweek is releasing its first Sustainability special report, and consumers are more driven by eco creds than ever, I think it’s time we got a symbol.
An accreditation specifically designed for adverts, something we can stick on the first 10 seconds in the bottom corner, or tucked away on billboards. Even referenced in social posts at the end of the meticulously shaped insight-driven hashtags.

I suppose one of the reasons to bring in a symbol, is that it’s time to move beyond the exception and become the rule. So far, the only carbon-negative adverts that I have seen have made a gimmick out of it. It’s an announcement that X brand is going to attempt to be more planet conscious - look even this advert is greener! Fantastic. What a good start. But if I see another static bike hooked up to a projector I’m going to scream.
There are plenty of people out there ready to talk about sustainability, but so few are ready to do the heavy lifting. I’m not ready to name and shame quite yet, but if you want to be in my cool logo club you’ll have to try a little harder.

So how do we get to this planet conscious, zero impact Holy land?

Ask questions. Think end to end. What happens with everything after you’ve had your use of it? Set builds, special builds, costumes, are all made of physical materials. What's happening to them after you’ve flogged a load of your new alcoholic seltzer water? Will your special build make a wonderful birdhouse, or will it be an eyesore jutting out of a rubbish heap?

In years to come future archeologists will be unearthing 8ft fibreglass Nike swooshes or novelty keychains promoting a long-discontinued cereal character. This era won’t be known as the plastic age, we will be Advertising age. That’s not a good thing.

But digital you argue. Digital doesn’t use materials. It’s not printed on anything, it’s not made of anything, how can that be bad for the environment. And NFT’s! NFT’s are going to save the world and also my marketing budget probably. I’m afraid it’s just not that simple.

Blockchain, whilst being clever and quite cool, is a waste of energy for the large part. If you understand how bitcoin mining works, the monolith empty tower blocks vibrating with the hum of graphics cards doing extreme calculations, you’ll understand the complications with blockchain. The amount of power, precious metals and third world man(child)power required to keep the first world in immaterial avatars is just not practical on a large scale. Also, do I really need a free limited edition Meta sprite when I buy some toilet roll?

The problem is that, to a man with a hammer everything looks like a nail. And right now there’s a lot of snakeoil to be sold with blockchain, mixed metaphors be damned.

Let’s be better. I yearn to take it for granted that my work doesn’t destroy the rock we live on.
As an industry we need to shift from talking about sustainability to thinking about the responsibility we have to all do better. Challenge your clients. Push your partners. Ask the CEO if he really needed the 48oz steak for lunch.
Lead the change as so many ‘tastemakers’ seem to regurgitate.
Be the difference, or as we say at Fox + Hare, Give a shit.

The gap between the suite and the street
Elusive Dream Team
Flipping the script on sustainability narratives
Becoming a B Corp will Boost our Impact
What has COP26 taught us about collaboration?